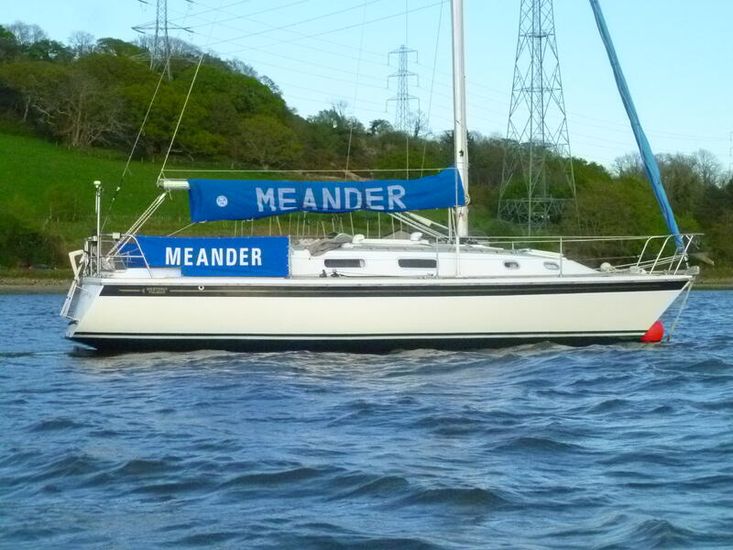 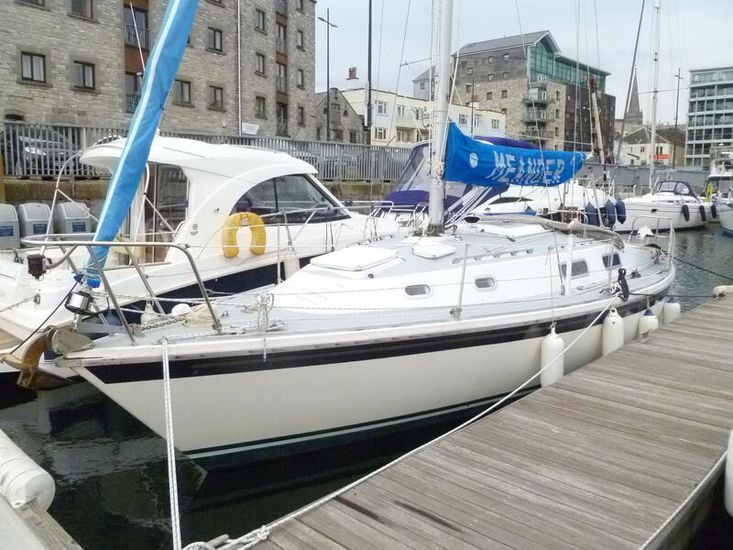 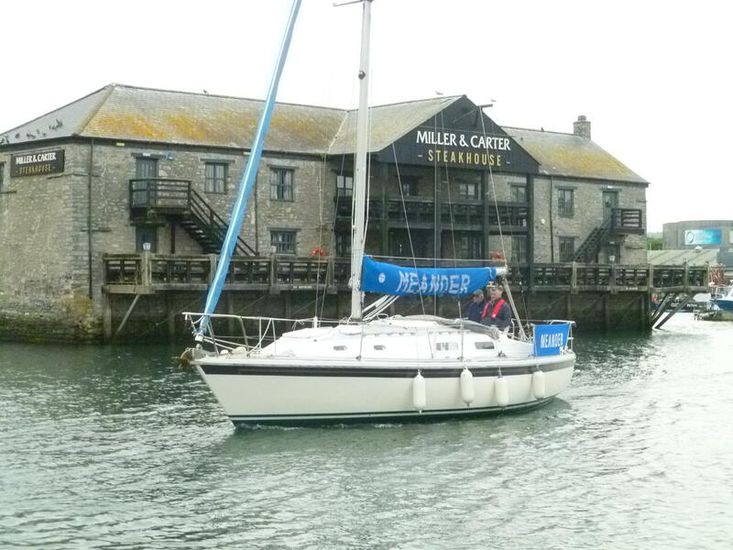 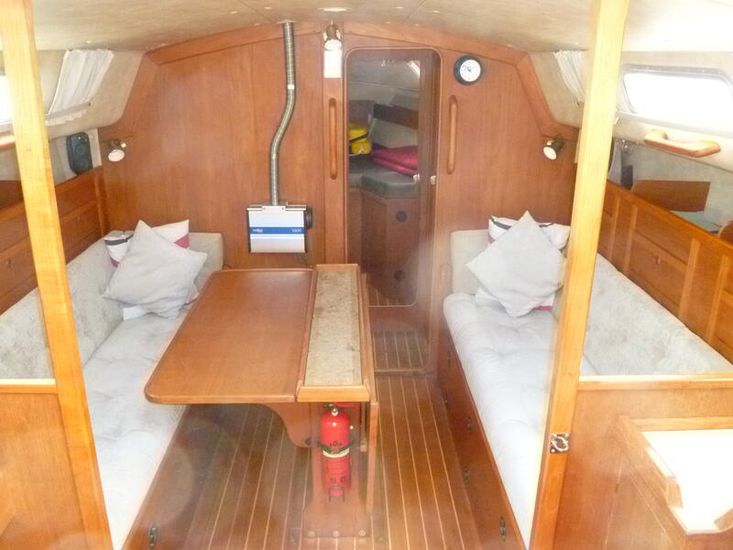 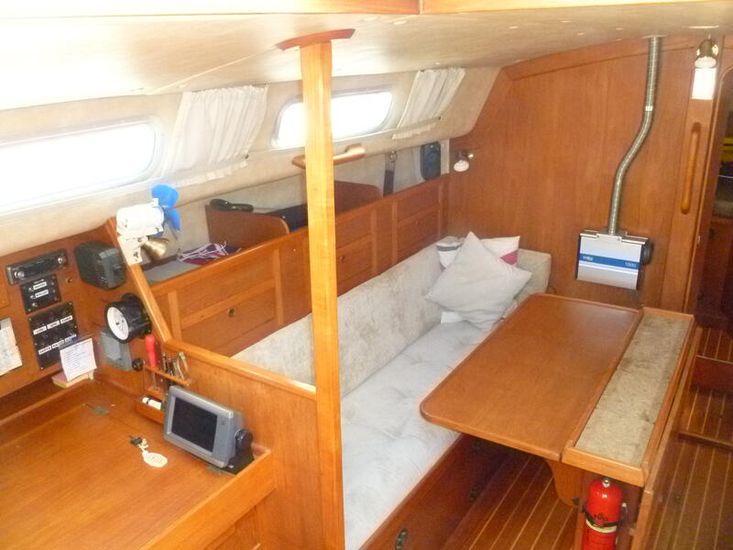 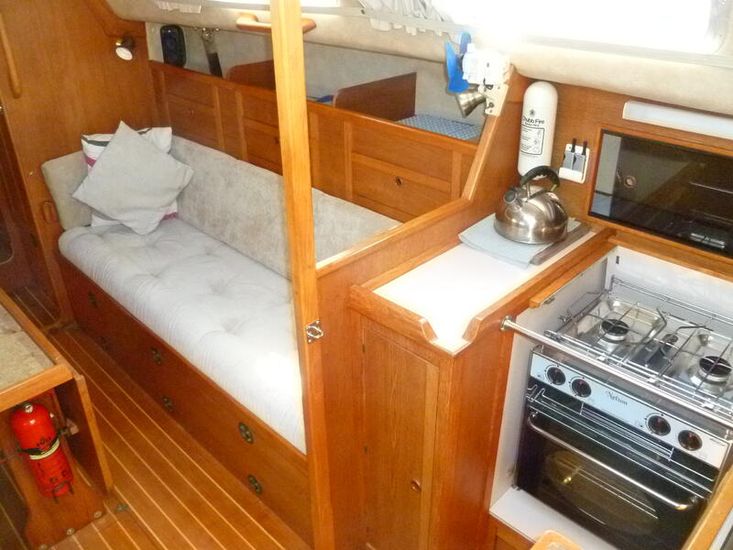 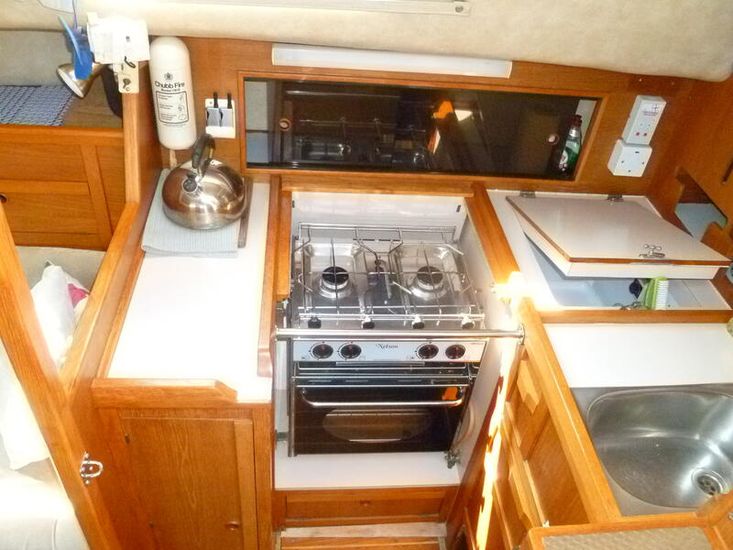 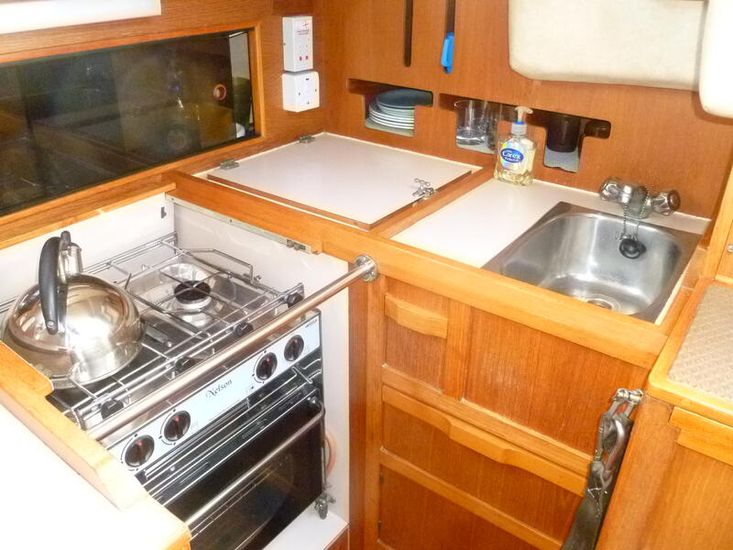 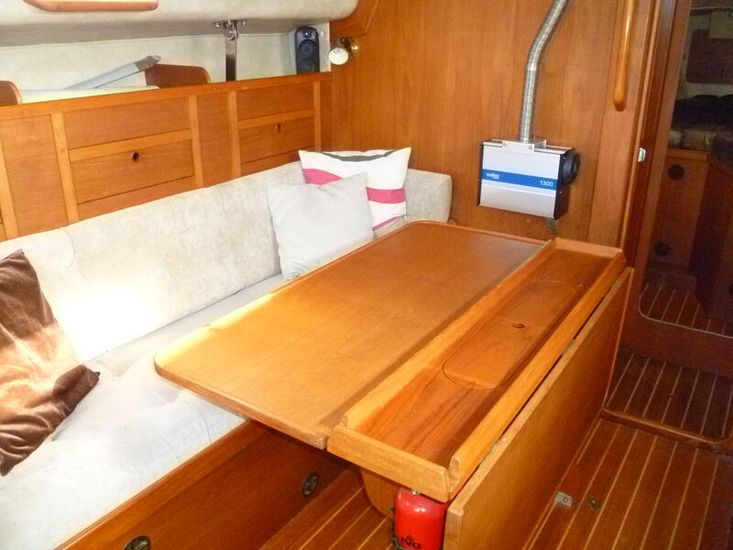 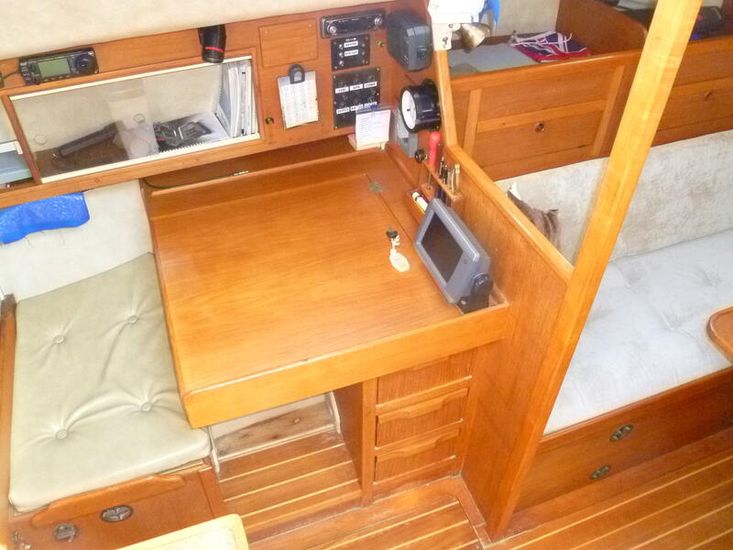 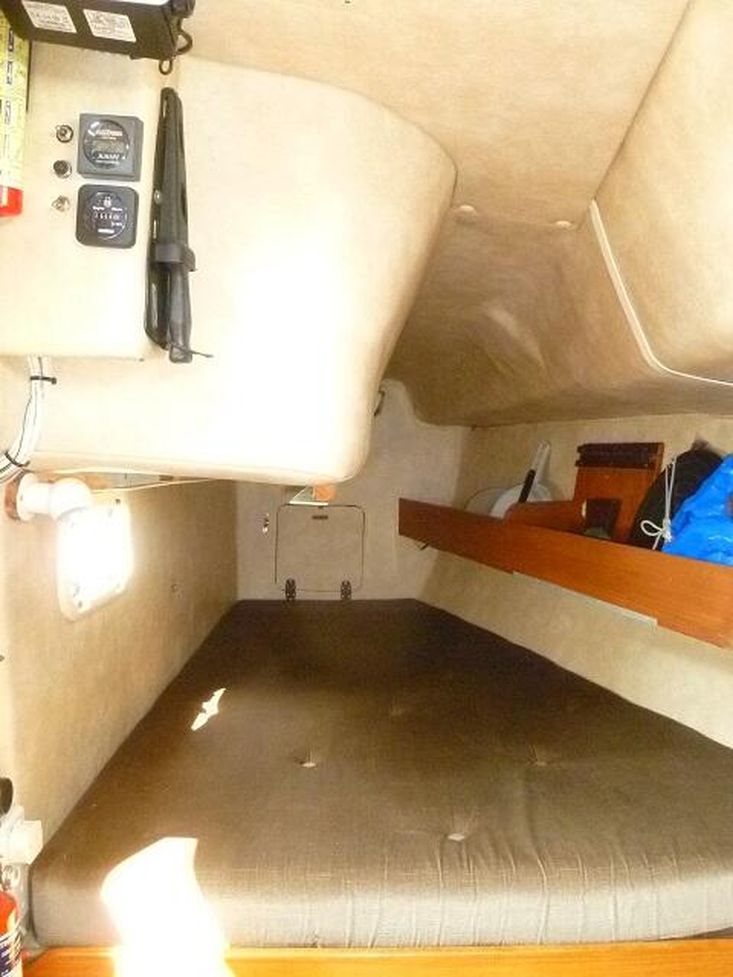 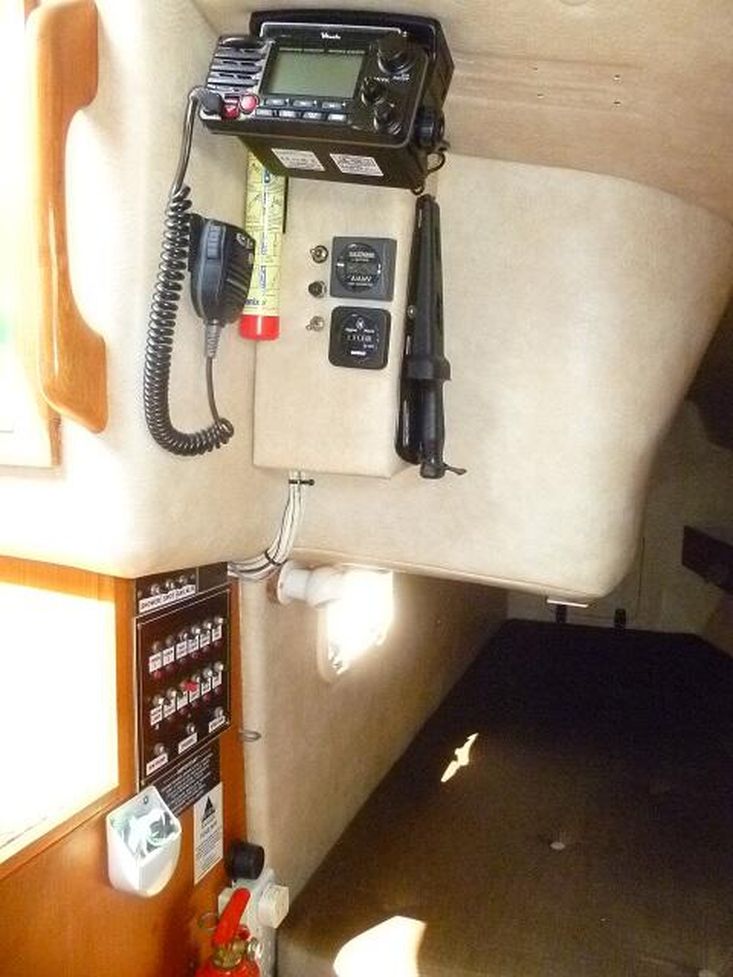 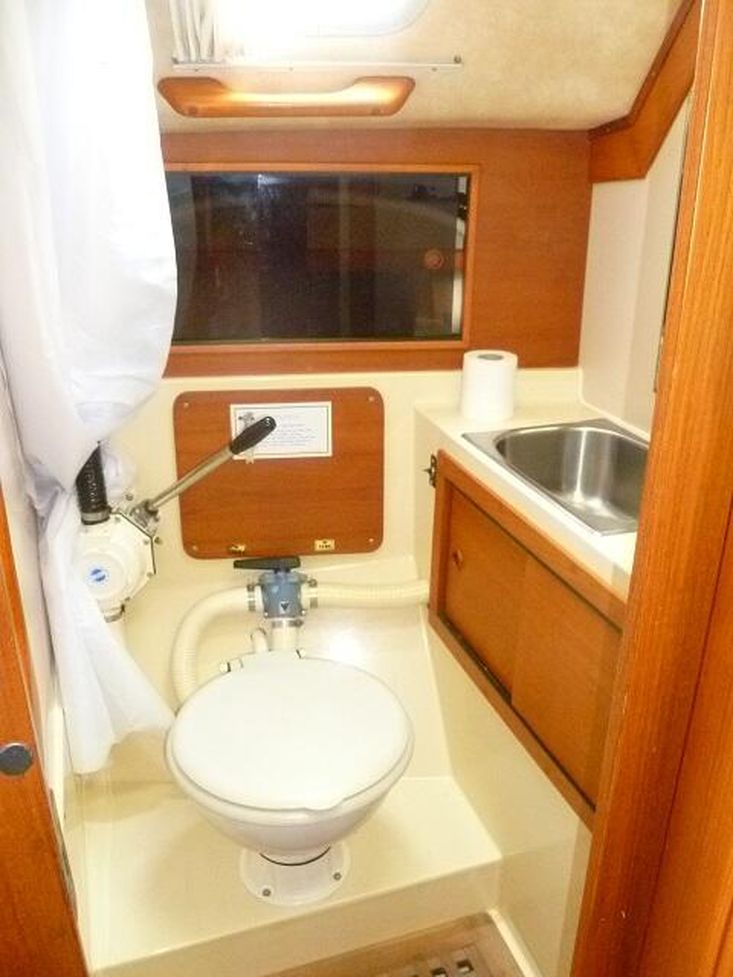 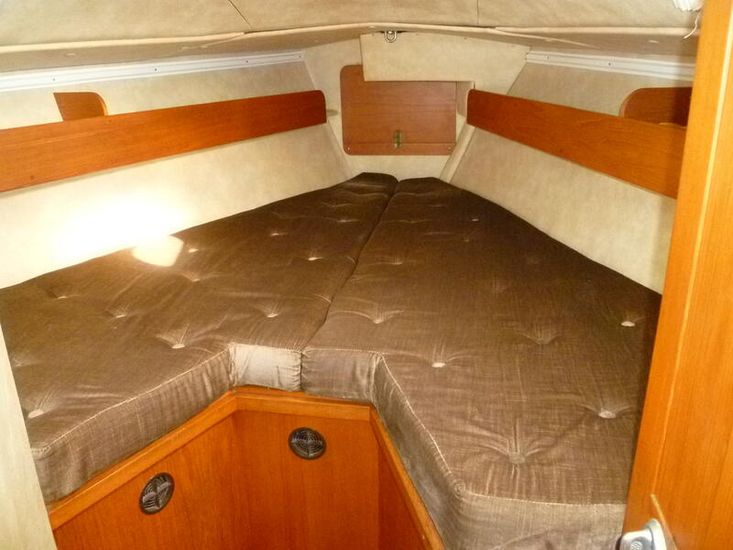 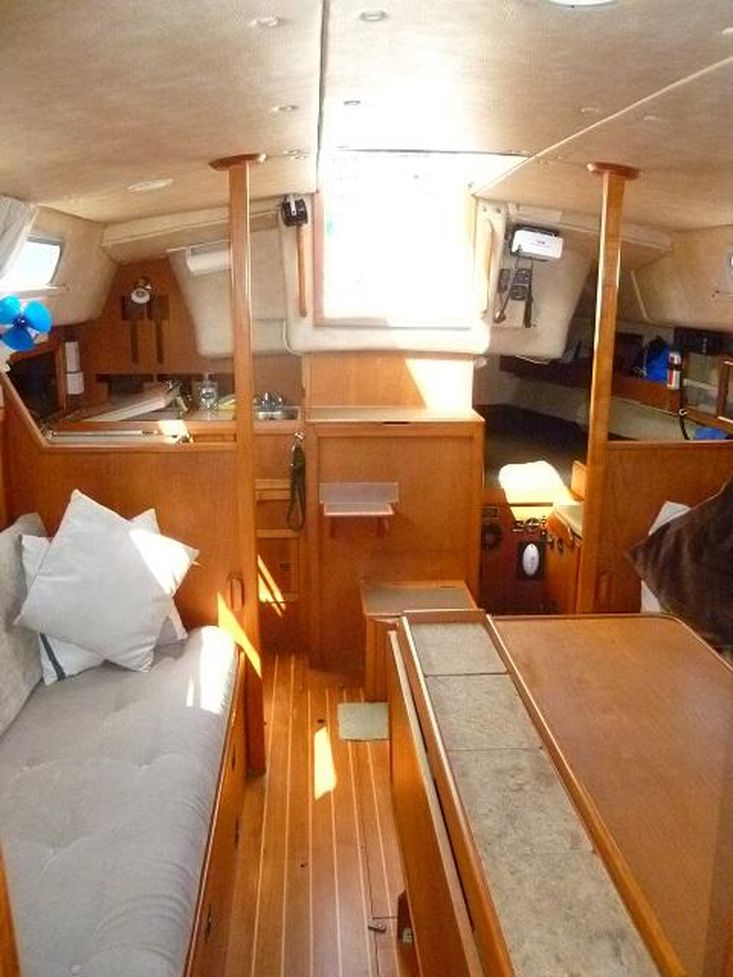 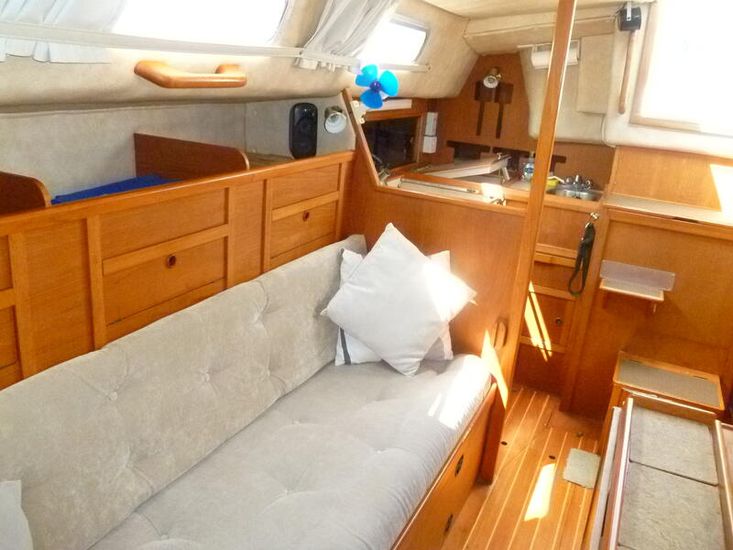 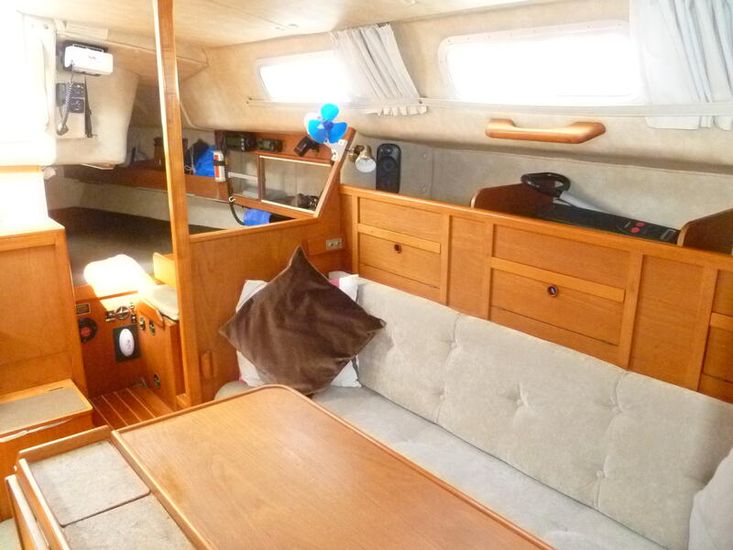 An outstanding, fin-keeled example of the popular and well respected Fulmar, with lines by Ed Dubois, Westerly's build quality and sailing schools' undiminished respect for their sailing qualities.

'Meander' has only been in two ownerships from new and has been in the current ownership since 1988. The owner stresses that no-one but himself has carried out work on 'Meander' in his ownership and he is right to be proud of the fact. We have only ever seen one other second-hand example of the class presented in the same sort of condition.

The specification and inventory of equipment fitted includes many desirables such as refrigeration, heating, hot and cold water, 12V windlass, holding tank, replacement cushions (in main saloon) and so on. Her underwater sections have been stripped and epoxied to high standard and she has been regularly stored ashore during winter (until 5 years ago this has been undercover in a barn, with mast down).

The vendor has come to the decision to 'hang up the sailing boots' in the belief that he has pretty well 'done it all and seen every wave going' so this capable and amazingly presentable Fulmar is being sold with an extensive list of useful loose equipment. She represents a rare opportunity for an enthusiastic, diligent and capable new ownership and the current owner is hoping that she goes to someone that will want to maintain the boat to the same level as she has enjoyed for the last 35 years.

Being of post 1983 vintage, the joinery within 'Meander' is of the more desirable teak-faced plywood with solid teak cappings, head-linings are of foam-backed vinyl, all of which were completely renewed in 2005/6. Headroom of some 6' 1" at the base of the companionway steps. All berths are 6' 3" long with those in the saloon, straight and parallel to the centreline and provided with lee boards thereby making excellent sea berths. The main saloon's cushions have been replaced quite recently in a high density foam and the covers have been renewed in an attractive, light-coloured fabric similar in feel to 'Alcantara', with the quarter berth cushion still in the same fabric as those of the original for'cabin cushions (seen in the pictures) and little used, having been kept at home while the quarter berth area has been used for bulk storage.

Despite being based on a river mooring when afloat, upon entry, 'Meander' immediately strikes one as being dry and fresh. All the interior wood work is of golden colour and fresh-looking, with absolutely no evidence of mildew in the grain and the surfaces are beautifully finished in the recommended two part lacquer to replicate the original finish, but with a smoother satin surface than original.

A 'black' water holding tank by PAR has been fitted for the toilet effluent.

An efficient Wallas 1300 hot-air heater is fitted on the main bulkhead to replace the previous unit that finally became irreparable in the absence of original parts.

The for'cabin offers a conventional double 'V'-berth with stowage beneath and shelves, some 6' in length on both sides. Despite deploying the infill there remains standing room to change clothing abaft the head of the berth, with a dedicated hanging locker, in addition to the more communal locker opposite the heads compartment.

The heads' compartment is forward and to port of the centreline, with the optional additional deck hatch over for greater light and ventilation. A Lavac marine toilet is fitted with a 3 way valve to allow both overboard or holding tank discharge. Hot and cold pressurised water is supplied to the stainless steel handbasin. Pull out shower attachment and 12v shower tray drain pump. Domestic hot-water is provided via a calorifier connected to the engine.

The saloon settees, re-upholstered in 2014, convert to sleeping berths utilising the space beneath the side locker units to increase width right to the side of the hull and the settee backs provide leeboards. The port side settee converts to a double berth for harbour use and there is good daytime stowage of pillows/blankets/duvets behind the backrests in addition to the space beneath and lockers with deep fiddled shelves over, above. The double-leafed table (With internal bottle storage) is a wonderful feature of the Fulmar's interior; genuinely big enough to accommodate six diners and securely mounted to the hull structure and thereby offering secure support/handhold to crew in a seaway.

The Navigation Station is to port and enjoys a dedicated seat rather than relying upon the head of the quarter-berth. The forward-facing chart table, with chart storage under, will accommodate a folded Admiralty chart and is supported by a 3-drawer plinth. There is also a 5' long locker with sliding perspex doors above and provision for bulkhead-mounted navigation instruments.

Aft of the Nav. Station there is a very generous quarter-berth that is 3' 10" wide at its head and an opening portlight to the cockpit well lend valuable light and ventilation to this area. On 'Meander', this berth has commonly been used for bulk storage (including a couple of folding bikes - not included in the boat's inventory) and so the berth cushion has been stored at home. 3 Sections of trimmed and bound carpeting were used to provide protection to the wood surfaces in this area when used for storage.

Galley: The "L"-shaped galley, to starboard at the base of the companionway, offers a large inset stainless steel sink with pressurised hot and cold water supply. There is an electrically refrigerated icebox (operating on 12V DC) and a gimballed, replacement 'Nelson' gas cooker (approx 7 years old) featuring a hob with three burners, grill and oven. There is excellent stowage with cut-outs in the aft bulkhead for crockery, a cutlery drawer and a locker under the sink, and an additional locker with three shelves.

Deck Equipment:
The Cockpit affords seating in comfort for up to six adults and provides tiller steering, single lever engine controls and instrumentation. There is a deep (climb down into!) locker to starboard with a gas canister locker for two bottles immediately ahead.

Sail controls are led aft by way of turning blocks and rope clutches to the winches mounted on the cockpit coaming and coachroof.

A 7.5kg Bruce anchor is stowed on the port pushpit and attached to 45' of 5/16 and 50m of anchorplait. Chain pipe fitting and below deck container stowage for kedge chain and warp

A 1000w Lofrans electric windlass is fitted to the for'deck and has a remote control pad to be able to operate it from the for'deck, while a Lofrans rocker switch is mounted in the cockpit enables the helmsman to control the windlass from aft.

A Bukh DV24ME, twin cylinder (24 BHP) diesel engine is an upgrade against the original 20 HP version and drives a fixed, two-bladed propeller via a conventional stainless steel shaft. This engine was fitted New in 2006. A lip seal by Volvo Penta is fitted to the inboard end of the stern tube for a relatively convenient and minimal maintenance, dripless seal.

Two engine hours run meters are fitted to the boat; one within a VDO Tachometer with approx. 2400 hrs recorded (This display fitted around 2000/2001) and the second Vetus display that was fitted at the same time as the new engine that currently records around 1950 hrs. The vendor stresses that the latter meter is the one that relates to the current engine!

The original electrical systems have been significantly uprated over the years, with four 102 A/hr 'Yuasa' batteries currently fitted for domestic supply and a single Varta 105 A/hr for engine cranking, with the usual rotary selector switch enabling either battery bank to be used for either function or for the two battery banks to be linked. Charging is by means of the engine-mounted alternator and a 50W photo-voltaic [Solar] panel, or a Sterling ProChargeD four-step 240V 40Ah AC battery charger (when connected to shore support on a marina).
NV-P600 600w Inverter supplying a 2 gang 13amp socket

An 'Adverc' battery charging regulator and battery monitoring system is fitted, together with a simple LED indicator light unit giving swift confirmation at a glance of battery state.

Rigged as a 3/4-rigged fractional bermudan sloop, this particular Fulmar's spars are of the later Selden spars (badged as Kemp Masts of Titchfield). The standing rigging is reported to have been replaced for the 2006 season (note that until 2016, the mast was struck each winter and the standing rigging removed for storage in the spare bedroom at home). A rigid rod kicker is fitted to lend support to the boom when reefing the mainsail. The backstay is fitted with an adjustable tensioner.

In common with all Fulmars, the lines are led back to the cockpit.

A named mainsail cover, with lazyjacks is approximately 5 years old.

The roller reefing genoa is fitted on a Hood Seafurl 2535 roller reefing system that replaced the original Rotostay.
In addition to the usual UV Strip fitted on the genoa, there is a separate furling headsail 'Sock' for added protection

A fixed length spinnaker pole may be stowed in deck stowage brackets.

General note on safety equipment: Any safety equipment such as Liferafts, EPIRBS, fire extinguishers and flares etc. are usually personal to the current owner(s) and if being left on-board as part of the sale of a used vessel may require routine servicing, replacement, or changing to meet a new owners specific needs.